At 9:48 a.m., the 25,000th heavy-duty card body saffron produced by Beihang Heavy-duty Penglai Branch gradually pulled out of the production line, which signified that Beiben Heavy-duty Trucks was in a contrarian situation to refresh its own production record, and the output growth rate leapt to the whole industry. first place. Among them, the Penglai branch company produces and sells 9,000 heavy trucks.

Bei Ben Heavy Duty Truck invested in Penglai, mainly based on the strong foundation and good environment of the Penglai automobile and parts industry. In recent years, Penglai City has focused on cultivating the automobile and parts industry as one of the four leading industries, proposing the industrial development concept of â€œstrengthening the industry leader, highlighting industrial characteristics, and improving the industrial chainâ€, and formulating industrial planning and industrial policies. Targeted selection of domestic and foreign famous manufacturers of automobiles and parts for investment promotion. Currently, it has more than 20 automobile manufacturing projects such as Beiben Heavy Industry Penglai Branch, FAW (Shandong) Automobile Modification, Shunda Special Vehicle Modification, and Daewoo Korea. The North Mercedes-Benz heavy truck project settled in Penglai, filling the gap in heavy-duty truck production in Yantai. This year, the Penglai project will successfully complete the 10,000 production and sales targets. It achieved sales revenue of over 4 billion yuan. Penglai has also become one of the three major heavy truck production bases in Shandong Province.

The installation of Beiben heavy trucks has driven many supporting companies to follow up, which has led to the scale of the entire Penglai vehicle, serialization of special vehicles, diversification of components and clusters, and the formation of automotive industry clusters. To promote the cluster development of the project, the city is centered on Beiqi Heavy Industry and planned to build Beiben Heavy Truck Automobile Industry Park. It has successively attracted Beichi Wheels, Xinqiao Machinery, Dilian Chemicals, Dianlian Warehouse, Rongxin Machinery, etc. More than 30 supporting companies have settled in, covering more than 200 kinds of auto parts such as axles, wheels, transmission shafts, and chassis, as well as brakes and bumpers. Up to now, 68 companies have signed up and reached an agreement, achieving an annual production value of 4 billion yuan. It is estimated that by 2010, only a company with North Mercedes-Benz will be able to attract 120 auto parts enterprises to settle in Penglai. By then, more than 95% of the spare parts needed by the North Benz heavy truck can be supplied locally.

Our brake pads' range is more than 1500 types ,If you need more items ,please send me your query list to my mail account ,i will make quoation according to your item number,such as OEM NO,FMSI NO.,fdb NO.,AK NO,MK NO,LUCUS NO,WP NO ,LPR NO 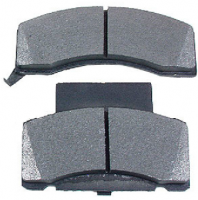