The function of the motorcycle suspension system is mainly two basic functions: one is to isolate and digest the bumps and vibrations from the road surface to ensure the comfort and safety of the rider and the passenger; the other is to provide support for the steering of the rider.

A typical configuration of a modern motorcycle suspension system uses a double front fork on the front wheel and a single or double barrel shock absorber on the rear. However, the real situation far exceeds this "typical configuration". The suspension system not only provides a strong guarantee for the rider to ride and control, but also closely related to the shape and style of the whole vehicle, and becomes an important support for the rider to advertise his personality and express himself. 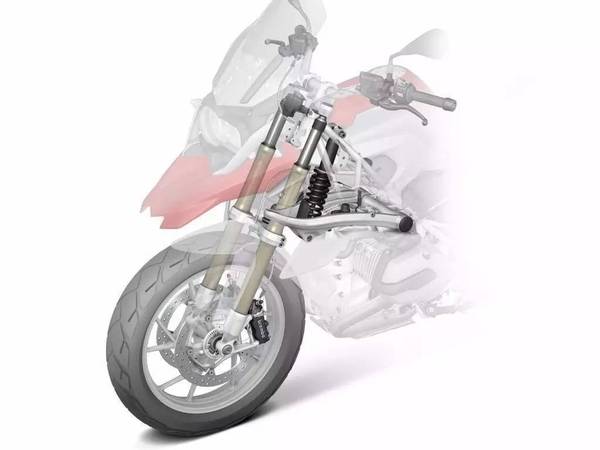 The Teleelever is one of the signatures of BMW motorcycles. At first glance, the remote pole front fork is no different from the conventional front fork. In fact, the structure is very different. The conventional front fork takes care of both shock absorption and steering, while Telelever separates the two functions. Moreover, the upright front fork is fixed by the upper triangular clamp and the lower triangular clamp, while the remote front fork has only one upper triangular clamp, thus allowing the sliding tube to be designed longer, that is, the overlapping portion of the sliding tube and the fixed tube More, this helps to increase the rigidity of the fork and enhances the stability.


Another advantage of the remote lever front fork is the significant reduction in head dive during violent braking, which makes the anti-lock brake system work more smoothly. Although the ABS produces a pulsed braking force, the remote front fork does not give the rider a sense of forward fall, enhancing the stability of the car and the rider's ability to control. 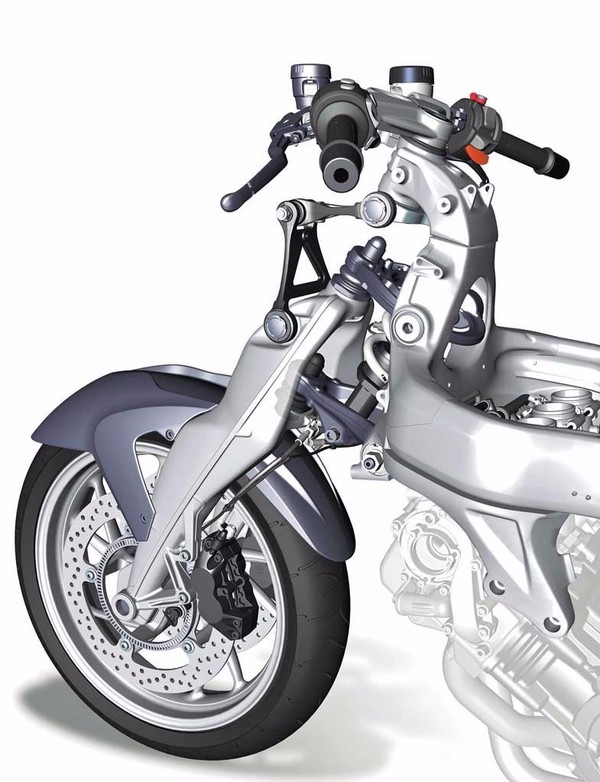 The predecessor of the Duolever was the invention of the British inventor Norman Hossack, which was further developed by BMW engineers. This suspension is different from the conventional vertical or inverted front fork. It is made of high-strength aluminum alloy material, which can provide a very clear road feeling, especially when running at high speed, the direction is very strong, giving the rider enough confidence; When violently braking, Duolever's characteristics make the K 1300 R not have a noticeable head dive effect, which makes the rider who is used to the conventional fork feel surprised. In addition, Duolever weighs 10% less and has a net weight of only 13.7kg compared to BMW's traditional Telelever front suspension.

The inverted front fork is relative to a conventional upright front fork, that is, the inner tube is mounted on the lower front axle and the outer tube is mounted in the upper triangular clamp. This inverted structure has two main advantages: one is to reduce the unsprung mass of the motorcycle, and the control is lighter and more sensitive; the second is to increase the torsional rigidity, which also helps to improve the handling performance. The downside is that the cost is much more expensive than the vertical fork, mainly used for sports cars and sports street cars.

The front end of the previous generation Honda CBR1000RR is equipped with a large piston (BPF) front fork and a large-capacity damper chamber, which significantly reduces the hydraulic pressure generated when the front fork is extended and retracted, making the entire damping process smoother, especially the stroke. The first stage of compression is more accurate. The rider's most direct experience is to get optimized handling performance. The front fork can provide rich and delicate feedback to the rider. When braking, the front end is more stable and solid! 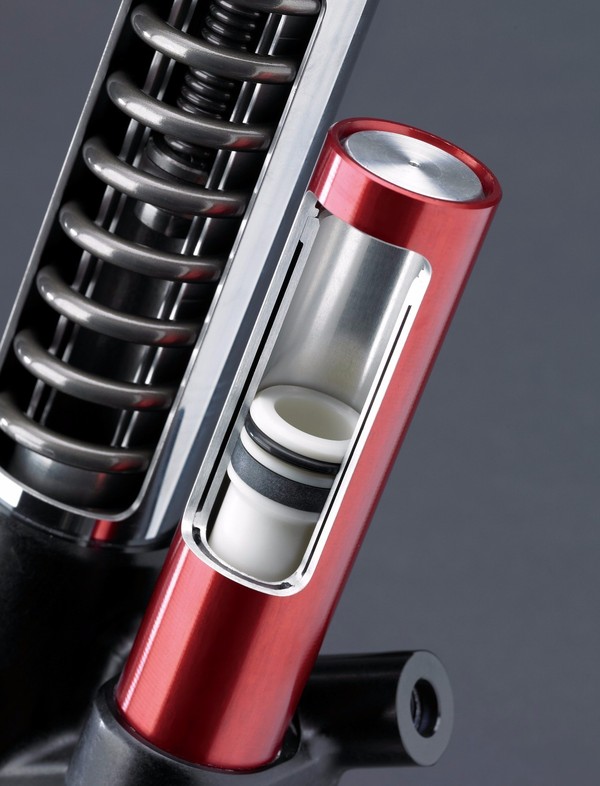 The suspension system of the Kawasaki ZX-10R embodies the successful experience and wisdom of the Kawasaki Racing Team in WSBK. The front wheel of the ZX-10R is fitted with a free-balanced front fork (BFF), a sharp weapon directly from the WSB racing car, now armed for the first time in mass-production motorcycles. In the conventional front fork, due to the fluctuation of the hydraulic balance, the cavitation phenomenon is often caused, which in turn causes instability of the suspension performance; and the freely balanced front fork jointly developed by Kawasaki and Showa can help suppress the fluctuation of the pressure balance and realize A number of advantages include enhanced brake stability, optimized front-end feedback for improved driving comfort, and independent adjustment of compression and rebound damping. The rear-mounted rear-back rear shock absorbers are also free-balanced and more compact and lightweight. This BF shock absorber provides a powerful shock absorption capability, taking into account the comfort of the road ride and the stability of the track at high speed. 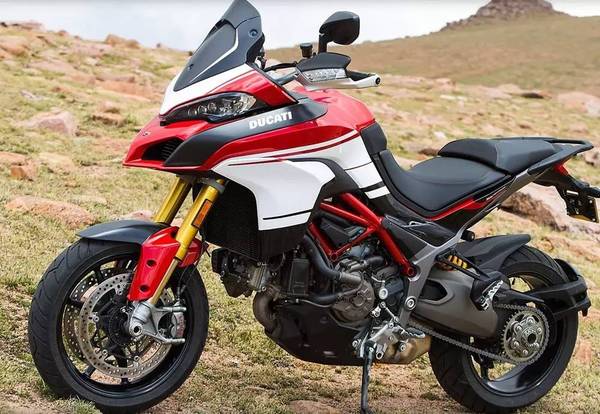 In 2012, Ducati won the championship in the 1205mL group of the Pax Peak International Mountaineering Competition. To celebrate this glory, Ducati immediately launched the Pixar Peak Multistrada 1200 S Pikes Peak. The Pikes Peak suspension system is full of expectations - the Suss Suspension System 48mm inverted front fork + single-tube shock absorber with a Sky Hook Suspension System (DSS) that keeps dynamic during the ride Adjust the damping for optimum stability. During the driving process, the pavement is bumpy, causing vertical force to impact the body; at the same time, the longitudinal force generated by violent braking, acceleration, and deceleration also destroys the balance of the car body.


To this end, Ducati developed a semi-active suspension system hook, assuming that a fixed control point is set above the vehicle, in accordance with this specific algorithm, responding to the input dynamic information quickly, continuously optimize the adjustment damping parameters, thereby maintaining the vehicle Maintain a constant balance with the assumed control points to give the rider a smoother ride. The sensor that provides dynamic information to the Skyhook system is a sensor that is mounted in the "elastic" and "non-elastic" portions of the frame. Based on the driving mode set by the rider, DSS quickly adjusts the compression and rebound damping of the suspension system according to the various parameters input. The corresponding increase or decrease of the damping force effectively offsets the bumpy road surface and the impact force formed by braking, acceleration and deceleration.

The most outstanding part of this "Tyrannosaurus" is the unique front suspension, which is equipped with an aluminum alloy double rocker arm to clamp the front wheel, and an adjustable single-tube shock absorber vertically installed directly behind the front wheel. . This front suspension, made up of double rocker arms and single-barrel dampers, is more like the rear suspension of a conventional motorcycle, giving the V-Rex a peculiar look. This unique front suspension not only absorbs vibrations and bumps like a conventional front fork, but also gives the handle a lightweight, flexible handling that allows the rider to play with the "monster" with a dry weight of more than 300kg. However, the distinctive personality of the "Tyrannosaurus" sometimes makes the rider have to accommodate it - due to the installation of a unique front suspension, the brakes are not a slight head dive like a regular motorcycle, but the V-Rex seems to be "stand up". The rear suspension is fitted with a single swing arm and the double-barrel shock absorber is mounted almost horizontally behind the engine.

The characteristic of the Harley soft-tail family is to simulate a classical hard-tailed shape, presenting a low and long outline. Breakout, a member of the soft tail series, naturally inherits this classic feature. It is not really a hard tail, because the rear shock absorber is installed, but it is hidden horizontally inside the car body and is hard to find. The Breakout style is radically hot, with distinctive spray and personalized components. The most eye-catching is the super fat tires. The front end of the "sudden" has a strong 49mm front fork, and the front fork spacing is about 1.5 inches wider than the previous FX Softail to install the thicker 130mm front tire.